Hi-Reach receives one of the first Nifty HR28 Hybrid machines. 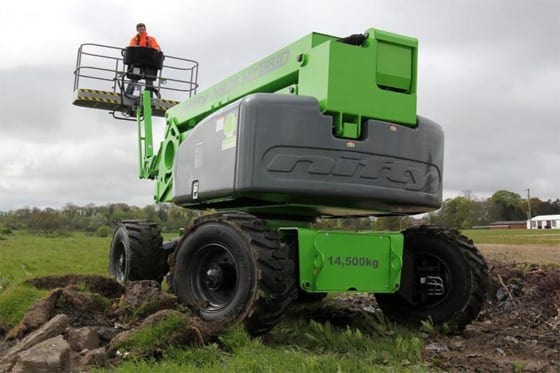 Posted at 07:50h in NiftyLife by Nifty Admin

Hi-Reach Rentals Australia, Murrarie QLD Depot, has recently taken delivery of a Nifty HR28 Hybrid. One of the first to come to Australia.

This all-new Niftylift HR28 Hybrid boom boasts one of the largest working envelopes in its class and is also the smallest and by far the lightest. The specification includes a 28m working height coupled with an impressive 19m of working outreach, and all from a chassis weighing just 14,500kg. This lower weight also offers the significant benefit that smaller more cost effective transportation to be used when moving the HR28.

Other features of the Niftylift HR28 Hybrid include Niftylift’s multi award-winning SiOPS® operator safety system as well as a 150º fly-boom with 180º cage rotate and 280kg capacity.

However, the most innovative feature of this machine has to be its Hybrid power system. This enables the use of a smaller Diesel engine, reducing fuel consumption(and thereby running costs), and Niftylift’s advanced exhaust purification system (which includes a catalytic converter) removes 90% carbon monoxide, 80% hydrocarbons and 30% of particulates, further enhancing its green footprint.

A Diesel Re-Gen feature charges the machine’s batteries during normal Diesel operation (much faster than mains charging), so the HR28 Hybrid can potentially work 24 hours a day, seven days a week greatly improving its utilisation potential. And if that isn’t enough, it can also be operated electric-only for clean, quiet operation both inside and out.